Every January we celebrate the life of Dr. Martin Luther King, Jr. and honor the memory of this civil rights pioneer who dared to dream. As we observe Martin Luther King Day, let us remember Dr. King’s vision for equality, dignity, and respect for all human beings

Dr. King followed the non-violent protest philosophies of Gandhi and constantly reminded his followers that their fight for equality would be victorious if they did not resort to bloodshed.  Between 1957 and 1968, Dr. King traveled over six million miles and gave over 2500 speeches, while writing five books in support of civil rights and equality for all Americans.

On August 23, 1963, more than 250,000 people gathered in Washington D.C. where Dr. King led a peaceful march to the Capitol Building to support the passing of laws that guaranteed every American equal civil rights.  It was on the steps of the Lincoln Memorial that Dr. King delivered his legendary speech later entitled, “I Have a Dream.”

During his crusade, Dr. King was awarded five honorary degrees and named “Man of the Year” by Time Magazine in 1963.  At the age of 35, he became the youngest person to receive the Nobel Peace Prize and donated his prize money of $54,123 to the civil rights movement.

Martin Luther King Jr. skipped two grades in high school, 9th and 11th, and entered Morehouse College at the age of 15 in 1944. By 19, he received a Bachelor’s Degree in Sociology.

Today, more than 700 streets in the United States are named after Martin Luther King Jr. There is one such street in almost every major city. George Washington and Abraham Lincoln are the only other Americans to have had their birthdays observed as a national holiday (now combined as President’s Day).

On the evening of April 4, 1968, while standing on the balcony of his motel room in Memphis, Tennessee, this man of peace was violently assassinated.

“I have a dream that one day this nation will rise up and live out the true meaning of its creed:   We hold these truths to be self-evident; that all men are created equal.  I have a dream that my four children will one day live in a nation where they will not be judged by the color of their skin but by the content of their character…”

When we celebrate this holiday, we are celebrating the life and legacy of a man who brought hope and healing to our nation. We honor the values he exemplified and remember his teachings of courage, truth, respect, integrity, humility, and service.

What Does Martin Luther King, Jr. Day Mean to You?

As part of our Martin Luther King, Jr. Day celebration, we've partnered with Wellington Community High School's BLAST - Black Leadership & Achievement Student Team to produce a special video highlighting the impacts that Dr. King and the Civil Rights movement have on their lives.

Watch as these young leaders share what MLK Day means to them.

Life and Thought of Dr. Martin Luther King Jr. in a Climate of Change

This presentation focuses on Dr. King’s remarks, “From Chaos to Community, Where do we go from here?,” with words by Dr. Terriel Byrd, Palm Beach Atlantic University professor, minister and author, notably of “By This Shall We Be Known: Interpreting the Voice and Message of Dr. King, Jr.”

Followed by a discussion by Dr. Byrd on Life and Thought of Dr. Martin Luther King Jr. in a Climate of Change, he came to South Florida in 1999 to teach at Palm Beach Atlantic University. Byrd was recently named Fellow in Intercultural Engagement, a position that works to promote diversity, racial equality, and equity on Palm Beach Atlantic University’s campus. Byrd will discuss book chapters from his work, “By This Shall We Be Known,” drawing connections between Dr. King’s words and the current socio-political climate.

My Brother Martin: A Sister Remembers Growing Up with the Rev. Martin Luther King Jr.

The older sister of Dr. Martin Luther King Jr. shares her outstanding and inspirational story of how one boyhood experience inspired a movement that would change the world as we know it.

Take a virtual tour of the Jim Crow Museum prior to the conversation with Dr. Pilgrim. Bring your questions to the 3 PM event. 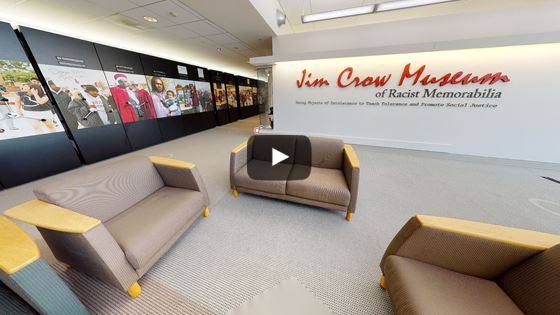 Stay tuned for a list of MLK Day events happening around our area.

This Day celebration includes a variety of performances, the parade, and gate specials for large groups.
Visit the South Florida Fair's website for more information.

The Dr. Martin Luther King, Jr. Memorial Park, located at 2200 N. Flagler Drive, was completed in 2004. The park is the largest of its type in Florida and one of the largest memorials commemorating the life of Dr. Martin Luther King, Jr. anywhere in the Southern United States. The park contains numerous plaques and photos commemorating Dr. King's life, family, and speeches, interspersed with highlights of the civil rights movement. The highlights are a bronze sculpture of Dr. King backdropped by cascading water on a granite wall and the display of flats, representing areas of great influence to King's life, waving over the Intracoastal. This park was chosen as only one of five of PSC MILLENIUM Legacy projects. Learn more about the park by visiting the Martin Luther King Coordinating Committee of Palm Beach County's website.

Free Day at Public Lands Across the U.S.

A documentary produced by faculty and students in the Roy H.  Park School of Communications at Ithaca College and Memphis PBS affiliate WKNO-TV.

It also features a Perspectives Online Magazine which features commentary of important but little known events in black history often written by the individuals who participated in or witnessed them.  To date, more than 100 articles have appeared.