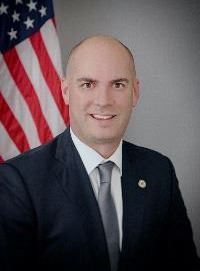 Vice Mayor Michael Drahos was elected to the Village Council for a four-year term commencing on March 22, 2016. He served as Vice Mayor from 2018 to 2019 and was appointed to the position, once again in April 2022.

Active in the community at an early age, Councilman Drahos participated in Wellington's baseball, basketball, and soccer leagues while spending his summers at the Wellington Boys and Girls Club. During high school, he was a head coach for two 4 to 6-year-old T-ball teams as well as a 7 to 8-year-old Little League team while also working as a feature writer for the Wellington Town-Crier.

Councilman Drahos and his family moved to Wellington in 1986 when his father, an engineer at Pratt and Whitney, was transferred from Hartford, Connecticut to the company's West Palm Beach headquarters. Beginning as a fourth-grader at Wellington Elementary School, Michael is a product of the Wellington school system, having also attended Wellington Landings Middle School and graduating from Wellington High School in 1995.

Councilman Drahos is a graduate of Florida State University. During a summer break, he returned to Wellington Elementary School to work as a camp counselor where he met his college sweetheart, Nathalie. After graduating from Florida State in 1999, Michael obtained a law degree from Nova Southeastern University with Honors after accumulating over 200 hours of community service during his summer breaks. Michael and Nathalie married in 2006 and now raise their daughters, Julia and Sophia.

Councilman Drahos is a shareholder at Gray Robinson, P.A., where he specializes in maritime law at the firm's West Palm Beach office. Michael litigates in state and federal courts throughout Florida and has attained an AV Preeminent rating with Martindale Hubbell. After serving two years on the Wellington Education Committee, Michael served as a member of the Village of Wellington Planning, Zoning and Adjustment Board from 2010 to 2016. He is also the founder of The Young Professionals of Wellington.

Councilman Drahos is committed to ensuring credibility and fairness at Village Hall. As a resident and a leader, he continues to look for ways to improve our already Great Hometown.