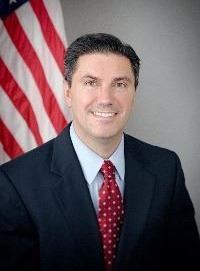 Councilman Napoleone grew up in Boca Raton and is a graduate of the University of Florida and St. John’s University School of Law. In 2002 he and his wife Cyndi moved out to the Wellington area with the hope of starting a family. They were attracted to Wellington by its parks, greenspace, and family-friendly community, in addition to its excellent public schools. They are now raising two boys, Christopher and Luca.

Councilman Napoleone is an attorney with the firm of Day Pitney, LLP and his practice is focused on representing businesses and individuals in contract litigation, business transactions, corporate structuring and probate litigation. He is a past president of the 3,000 member Palm Beach County Bar Association (PBCBA) and was instrumental in helping the PBCBA generate funds to achieve a decades’ long desire to own its own building.

Since 2011, Councilman Napoleone has served as a board member of the Early Learning Coalition of Palm Beach County; in May 2013, Governor Scott appointed him to serve as vice-chair. In 2015 Michael served as a member of the Village of Wellington’s Charter Review Task Force. Vice Mayor Napoleone previously served on numerous civic and professional committees including as chairman of the PBCBA’s Professionalism and Diversity committees, six years on the Florida Bar’s Standing Committee on Professionalism, and six years on The Florida Bar’s Constitutional Judiciary Committee, including two years as chair and two years as vice-chair. Mr. Napoleone is passionate about public service and civics education and was part of the Florida Bar’s "Benchmarks" program which was tasked with developing programs to promote civics education to adults.

The Palm Beach County League of Cities appointed Mr. Napoleone to serve as an At Large Representative in May 2020.

Councilman Napoleone is committed to developing a long-range vision of Wellington that includes resident input. Wellington is where we decided to raise our family and it’s where I want to be for the next 20 years. It is important that we recognize that today’s decisions will create the Wellington that our children will inherit.

Please be advised that Wellington is a public entity subject to Florida’s broad public records law under Chapter 119, Florida Statutes. Most written communications, including email addresses, to or from Wellington employees and elected officials regarding city business are public records and are available to the public and the media upon request. Your email communications may therefore be subject to public disclosure. If you do not want your email address to be subject to disclosure as a public record, please do not send electronic mail to Wellington. Instead, contact the city by telephone at 561-791-4000 or 561-363-7905.